My two Accelerated Math 1 classes have been working with sequences. They have completed some investigation problems to develop vocabulary and to grapple with the characteristics of different types of sequences. We have built definitions of explicit and recursive formulas as well as of arithmetic and geometric sequences, and as a class, we came up with explicit formulas for both of these types of sequences. Their work has impressed me, especially given that we’ve done all of this using function notation, which is totally new to everyone. Students don’t even seem particularly troubled by some of the more challenging problems (such as figuring out missing terms when given two specific terms or determining the term number for a far-off term) that have frustrated some of my past classes. I know that they need more practice, but overall, I’m pleased with their progress.

For practice, we completed a matching activity in which students had a card with either the formula for a sequence or the sequence itself. They had to find the student with the matching card. I designed the sequences to be fairly similar so that students really had to think about which sequence went with which formula. It wasn’t enough, for example, to notice that the first term of the sequence matched up with the formula because multiple sequences had the same first term.  My students handled this activity pretty easily.

I wanted to try something similar with Desmos, so I made this Polygraph activity. It features eight numerical sequences and eight explicit formulas. I expected students to ask questions like: “Is your sequence arithmetic?”; “Is the common difference positive?”; and “Is the first term negative?” Although I certainly saw questions like those, I noticed that many students used imprecise language and pursued a line of questioning that lacked a logical progression meant to eliminate possibilities. Their work surprised me and has made me wonder what they have really learned. Here is some of their work along with my commentary. 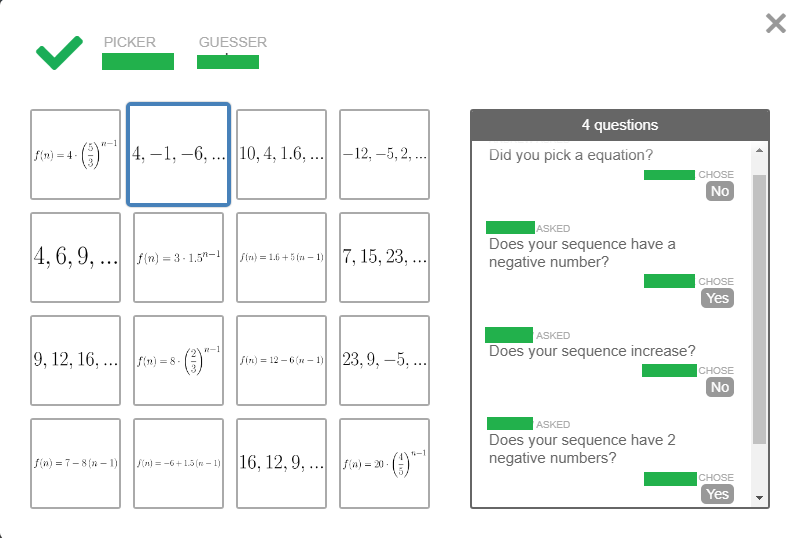 The questions about negative numbers make sense on the surface, but all decreasing arithmetic sequences will have negative numbers eventually. Is it important that this student was referring to the first three terms without saying so? Had I been the picker, I may well have answered “yes” to that question even if my sequence only displayed one negative number. Substantial mathematical background allows me to focus on this sort of nuance. How do I help students refine their language to remove the ambiguity that I see? Or am I seeing an issue where one really does not exist? 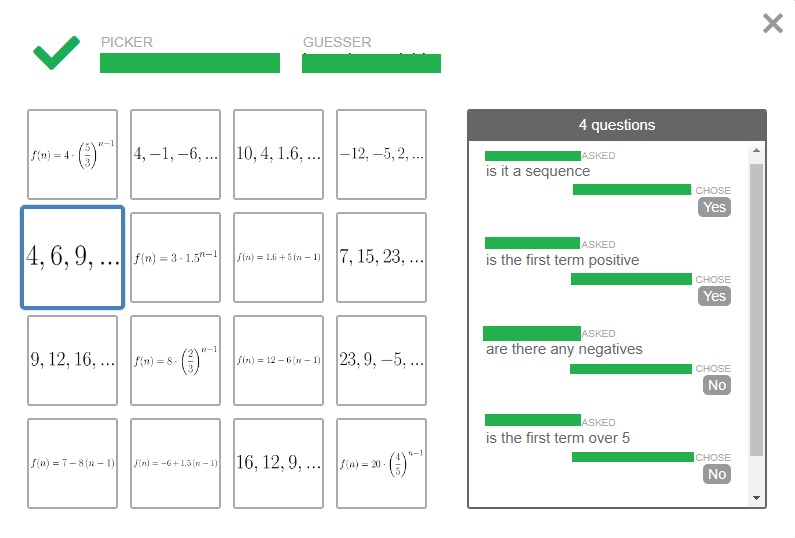 Does the formula for a sequence count as a sequence? Should that first question be worded as “a numerical sequence” to avoid confusion? Would

count as having a negative? Does using “over” instead of “greater than” present a problem? 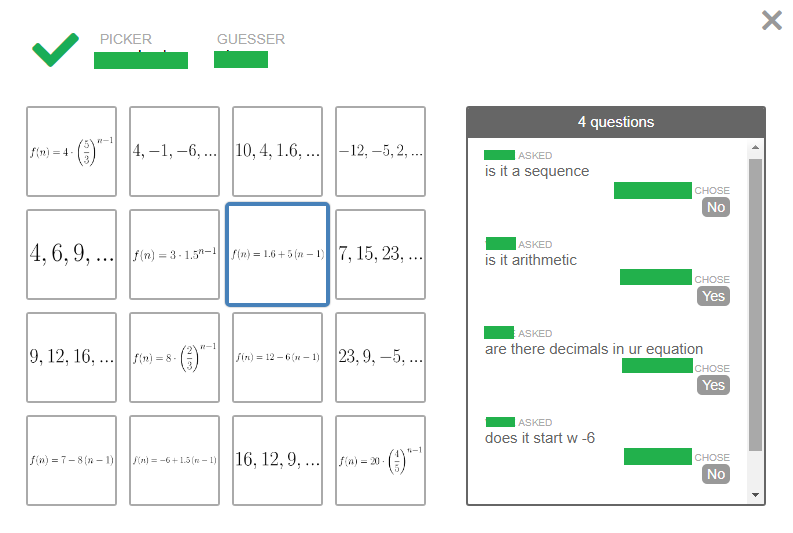 Although I’m happy to see “arithmetic” used correctly, the word “decimals” worries me. I’m not sure that “decimals” has a firm definition in my students’ minds. These students seem to be referring to numbers containing a decimal point, which makes sense, but I wonder what they think of

. Does that count as a decimal? Perhaps a better question would ask about non-integers. 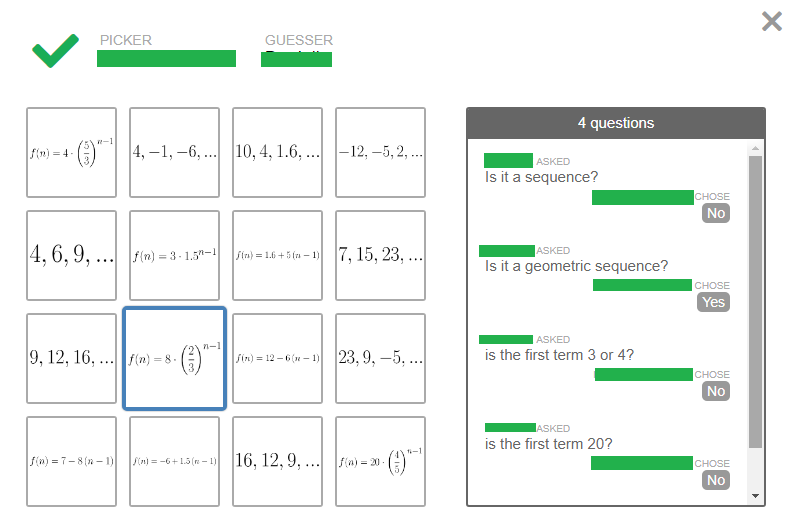 Sure, these questions get the job done with minimal ambiguity, but I’m not a huge fan of the final two questions. Without a need for vocabulary like “common ratio,” I suppose it makes sense to ask these questions. Maybe I need to force students into choosing between two geometric sequences with the same first term. But would students then simply ask about “the number in parentheses” or something similar? 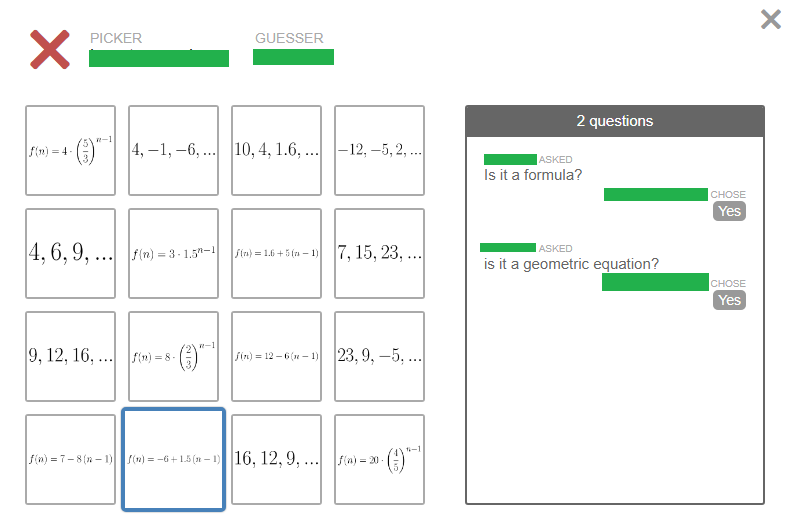 Ah! Here’s a misconception! Seeing multiplication in the equation led the picker to call it a geometric sequence. This is why I love Desmos activities – concrete evidence of students’ understandings and misunderstandings that I can immediately work to address. 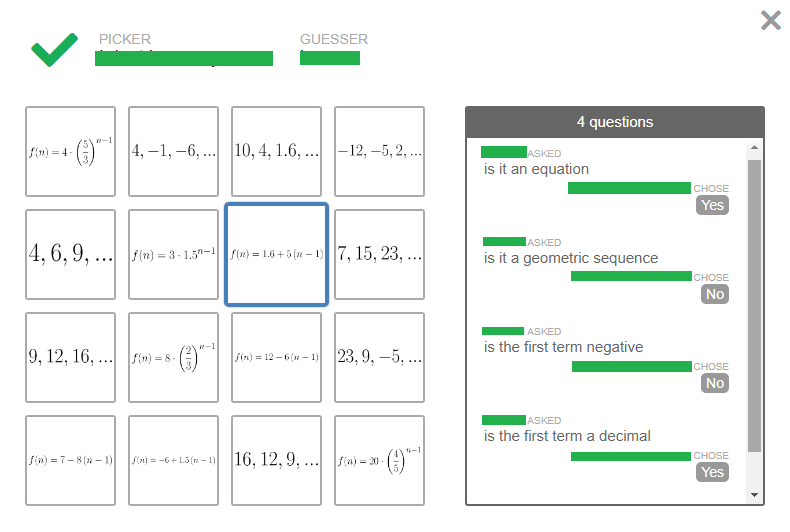 Another opportunity for improvement on my part! The two sequences remaining after the first three questions differed in two regards – their first terms and their common differences. A possible revision might be to change the highlighted formula to

Lots going on here. Plenty of great vocabulary here (e.g. “explicit formula” and “common difference”) as well as some great questions about odd and even numbers. I’m particularly fond of the question “do you add to get to the next term.” Sure, I’d love to see “arithmetic sequence” show up in that student’s vocabulary, but it’s hard to fault a student for a description that just works. 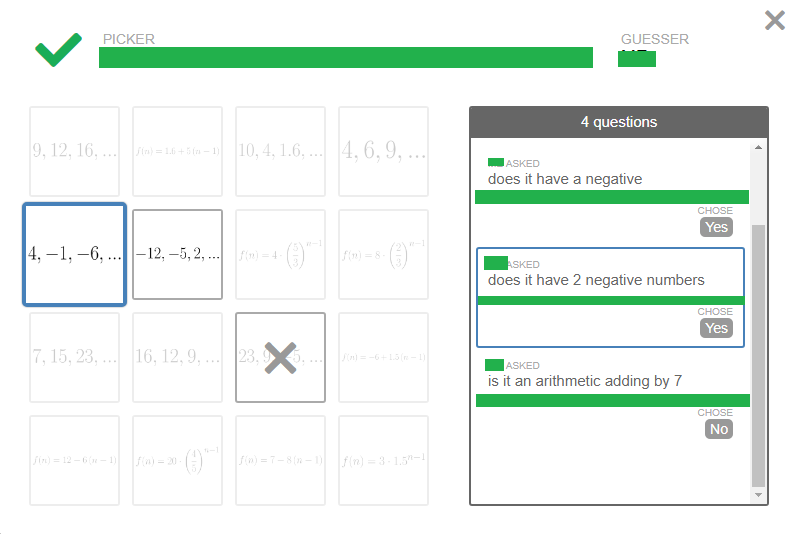 Just a fascinating line of questioning here. Only one of the three visible sequences has exactly two negative numbers, but the students here only considered the visible terms. Why did the guesser asked about negative numbers anyway? Wouldn’t asking if the sequence increases (or decreases) be simpler? And to follow one interesting choice with an even more interesting question…wow! Why does this student bother including the word “arithmetic” in this question? Both of the sequences are arithmetic. And why ask if it’s adding

instead of simply asking if it’s increasing? This sort of specificity doesn’t really add anything other than the risk that one of the students miscalculates and leads the other astray. I wish I could have been inside this student’s head!

So much to say about these… One student was extremely curious about the starting number. What does that say about that student’s understanding of sequences? Several students asked about function notation rather than asking about formulas or equations. How about the student who asked about positive numbers, even numbers, double-digit numbers, AND the number

? Yes, these questions got the job done, but what do they really tell me about my students’ understanding of sequences?

As you can see, my students used all sorts of vocabulary. They used lots of different math terms, but they didn’t use as much of the sequence vocabulary as I expected. On the one hand, I’m proud of their ability to use what they know and what they’re comfortable with to find success. But I wonder what this all says about our work with sequences. This Polygraph activity certainly differs significantly from the work we’ve been doing. Students need to do more than just perform calculations and interpret numbers. Polygraph forces students to wrestle with sequences in a unique manner and to draw distinctions between sequences represented numerically or as equations. Perhaps in the face of such a challenge my students retreated to the most natural language. Perhaps their understanding of sequences isn’t what I thought it was. Perhaps the numerical sequences and explicit formulas I chose did not lend themselves to the sort of questioning and language that I had hoped for.

So what does this all mean for my teaching and for my students’ learning? I actually feel like I’ve done a better job with sequences than I ever have before. So much more of our work this year has involved thinking through and solving problems. But maybe I haven’t gone far enough in including rich, meaningful tasks. Or maybe this was just a necessary step on the path toward mastery. As we continue working with sequences and eventually use our sequence knowledge to develop linear and exponential functions, I look forward to further probing my students’ understandings and challenging them to engage more deeply with the mathematics.